This is experimental. The producers of the Blue Ball Skeptics would like to go out for lunch on June 20th. And for the first time, we are going to try a bat signal: putting a call out on our blog. We only know of one other blogger who has tried doing that, but his experiment results are not in yet. So we are just going to do it and see what happens. If you know anyone who might have an interest in going out for lunch with us, please let them know. If you might have an interest, read on.

The rest you can find out by googling Damion or Chas (along with your preferred keywords). We’re around 500 on the scoville scale. Not heavy into spice, but get along well with people who are. We have an unusual quirk or two but don’t expect any of our lunchmates to share them (e.g. Chas recently won a charity taco-burger eating contest, but he does not expect that sort of performance from anyone else). We enjoy lunchmates who love to boast of their own lunchtime exploits, especially over beer or soda or what-have-you. We are not going to get all angsty over how high your calorie count is. Indeed, that may well have much the opposite effect.

Okay. If all that hasn’t scared you away, read on. Otherwise, #BBSIPNFY. 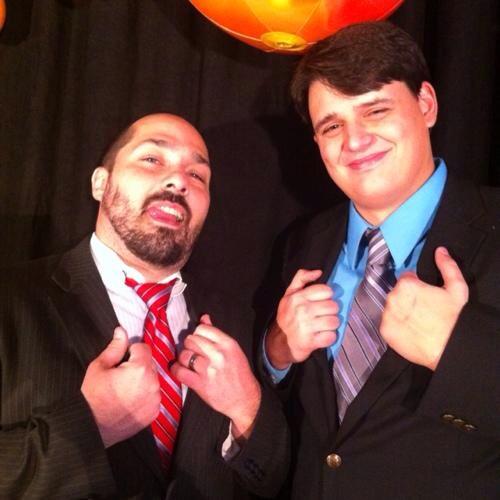 What you see is what you get

This June 20th we’ll be spending some time in Tulsa, because FreeOK will be held there this year. There is a hole in our schedule smack in the middle of the day on account of human physiology, and we’re looking for someone to go on a lunch date with right then. Within that window we are flexible, but we don’t want to range too far out of the downtown area.

We can probably only fit around half a dozen lunchmates at our table. We’re likely to say yes to anyone who sparks our interest as an amicable conversationalist, but that’s too subjective and idiosyncratic to predict or define. If you want to inquire, please message us on Facebook, or Twitter, or just leave a comment here on the blog. Just remember, it’s an unfair advantage you knowing a lot about us and what we look like, so please do remedy that information disparity, at least a little, first thing. We would very much appreciate it.

Now it only remains to see what happens.

The following story is almost completely made up, but is being passed around as if it really happened. Skeptics, be warned.

With the first day of hearings taking place before the United States Supreme Court, an awkward happening occurred when Supreme Court Chief JusticeJohn Roberts found out that both religion and religious establishments have nothing to do with the legality of same-sex marriage.

The uncomfortable exchange began when Chief Justice Roberts asked famed gay rights lawyer Mary Bonauto why she believed that we should “force churches and religious leaders to preside over a homosexual wedding that, when taken as a whole, would offend their moral conscience.”

Although she seemed taken aback, Bonauto replied with little to no hesitation.

Chief Justice Roberts then asked Bonauto to elaborate on her answer.

Bonauto replied, “Thomas Jefferson clearly stated that the intent and function of the 1st Amendment was that the country could never establish any laws based on…

The Joey and Angel Foundation for the Advancement of Love and Puppies (hereafter “Foundation”) publicly dissociates itself from the harmful and hateful rhetoric of the Pharyngula comments section.

The Foundation is publicly dissociating itself from the hurtful and dehumanizing, hateful and violent, unjust and defamatory rhetoric of the Pharyngula comments section. The final of many, many straws was its latest smear that “Douglas Adams . . . was a lecherous fucker.” We are also asking all ethical organizations and individuals to consider how you can help to reverse Pharyngula commenters’ harmful impact on the individuals they target and the atheist movement generally.

Some examples of rhetoric from the comments section of JUST ONE of Pharyngula’s posts:

“Fuck you, you piece of shit.”

“FUCK YOU. SERIOUSLY, FUCK YOU.”

“Fuck you, you lying sack of shit.”

“And before I forget: fuck you too!”

“Fuck you and your alleged skepticism.”

“…while you’re at it, go fuck yourself.”

“Oh fuck you and the horse you rode in on.”

“For everyone defending Shermer &/or the status quo: fuck you.”

“…a hearty FUCK YOU to the muckfucking asswipe who dropped that turd in here.”

“Fuck you big time!! You’re a fucking prejudice asshole. So once again; FUCK YOU!!”

“Double fuck you for doubting Jane Doe. This is not gossip you compassionless shitstain.”

“And a seriously raging fuck you to the slymey arselickers who are trying SO FUCKING HARD to preserve a rape culture they swear doesn’t exist.”

“…colorful suggestions about what they may or may not do with a rotting porcupine.”

“I have this nice crown of decayed porcupines for you. You can wear it as a sign of your terrible persecution as you trample out the vintage of the internet. Go forth and declare your outrage, Cupcake, the internet awaits you.”

“…take one of porcupines Caine has lying around and shove it up your ass.”

“These pieces of shit serial rapists need to own up to their behavior.”

“If you’d rather vent THAN STOP A SERIAL RAPIST, CARRY ON THE WAY YOU ARE.”

“…it is better that someone might occasionally get a bad reputation they do not deserve than that serial rapists should continue to get away with being serial rapists.”

“What’s happening is some women want to warn other women that Michael Shermer is a serial rapist.”

These are only a small sample of the Pharyngula’s comments section’s harmful, hateful, and defamatory rhetoric.

It might be possible to interpret any one example of this unrelenting character assassination charitably, and certainly Pharyngula’s comments section can hide behind a wall of unkind, hyperbolic or polemic words written by PZ Myers himself, and continue to use Myers’ unabashed incivility to justify an obsessive hate campaign against any members of the designated out-group.

Ironically, the sheer quantity of this obsessive rhetoric can seem to minimize the harm of each example. It is easy for us to become desensitized to the reality of years of ridicule and hate framed as reasonable discourse. In fact, it might be really easy to just ignore it if you aren’t personally a target. Otherwise, it kind of blows.

Accordingly, the Foundation is now publicly dissociating ourselves from the well-poisoning and dehumanizing, hateful and violent, unjust and defamatory rhetoric of Pharyngula’s blog comments. We are asking all ethical organizations and individuals to consider how you can help to reverse its harmful impact.

[Credit to Michael Nugent and M.A. Melby for inspiring most of this post, and to the famed Pharyngula Horde for reviving the infamous dead porcupines.]

Some fuck-up skepticatheist or whatthefuckever published a blog post last week entitled “15 Sexy Scientists (with pics, of course)”, in which he embedded photos he found on the Web of female scientists that he apparently considers “sexy”. There has been a fuckton of discussion of this on various blogs–including that of the skeezbag motherfucker himself–about the significance of this blog post. Notwithstanding all the bloviating going on about this, it is really quite simple.

The fucking skeevd00d’s post is leering. Leering tells the person being leered at that their value as a human being is defined by how much other people want to fuck them. That is not a compliment. It is an oppressive boot on the neck designed to put women in their place. The internal mental state of the leerer and his “intentions” are wholly irrelevant to any of this.

We’ve been on hiatus from podcasting for a while, seeing as half of the team has been on paternity leave, and we’re nothing if not progressive about that sort of thing.

Speaking of progressives, we don’t have one on the show today because this episode is about the intersection of skepticism, atheism, and conservatism. We managed to actually find a true conservative who is both an atheist and a skeptic, and who was willing to talk to us about it.

If you’re an out atheist chances are to you’ve probably had someone try to tell you that atheism is “a religion itself”. I know I’ve found myself on the receiving end of such claims, and my normal response is to point out that religions are almost always centered around the veneration and worship of a supernatural entity of some sort and therefore atheism is not a religion. I’ve generally been happy with that argument, but it turns out it’s not how the law sees it. Supernatural beliefs are not required to exist in a belief system for the courts to view said belief system as “religious”. My guess is the courts have probably avoided such a ruling because “supernatural” seems kinda judgy and nobody wants to tell their family and neighbors they worship something magical, so they’ve worked around it. Besides, how could you “prove” the supernatural in a court of…

Does the covenant of marriage really matter? Let’s plunge into the Deeper Waters and find out.

Two days ago on February 18th, prominent internet blogger Richard Carrier, who seems to be the answer to all conservative NT scholarship in the eyes of internet atheists everywhere, wrote a post about how he is coming out polyamorous.

So what does it mean to be polyamorous?

A visit to the Polyamory society defines it this way:

Polyamory is the nonpossessive, honest, responsible and ethical philosophy and practice of loving multiple people simultanously.  Polyamory emphasizes consciously choosing how many partners one wishes to be involved with rather than accepting social norms which dictate loving only one person at a time.  Polyamory is an umbrella term which integrates traditional mutipartner relationship terms with more evolved egalitarian terms.  Polyamory embraces sexual equality and all sexual orientations towards an expanded circle of spousal intimacy and love.  Polyamory is…

In this episode, Chas and Damion visit with John and Zoe of the ASJP podcast.

Does experience show that this approach actually works?